Blanchett Neon was founded in 1947 by George Blanchett. 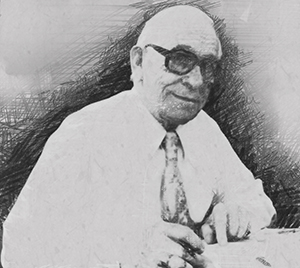 George Blanchett was born in 1909 into an artistic, and business savvy family.  At the age of 15, George was given the opportunity to work for Clyde Hook, of Hook Signs Ltd, and began applying his talents to the production of commercial signs, bulletins and pictorials.

In 1930, he was able to gain industry experience working for Neon Products of Western Canada in Vancouver, and built up the motivation to open his very own sign shop back in Edmonton.

Returning home in 1944, George began working for his father’s company Blanchett Decorators, and they relocated to a large, modern, and more visible location at 11448 Jasper Ave. in Edmonton. 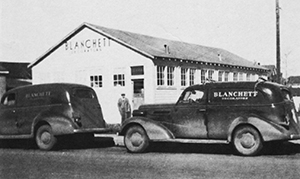 George’s younger brother Ted, having served with the Canadian Air Force in WWII, was discharged in 1946, and the two brothers, drove down to Calgary to purchase a used neon tube-bending and pumping outfit and formed Blanchett Decorators – Neon & Sign Division.

The business continued to operate as a decorating firm during the day, but during the evening, the design, manufacturing and installation of neon signs were the top priority. 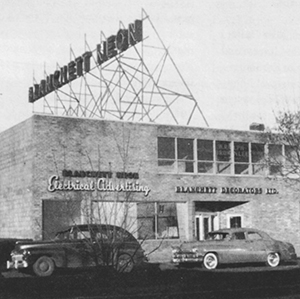 With Ted operating the decorating side, and George the neon division, the two operations were incorporated as separate companies in 1947, and
thus, the birth of Blanchett Neon Inc.

In the business boom that followed the Second World War, the large demand for signage led to quick expansion, and the two companies moved into new premises at 10224-109th Street in 1952. The business continued to grow over the next 17 years, with George’s values of only supplying clients with the highest quality goods and services provided by the most skilled, professional craftsmen, leading the company to move locations a third and final time, to our current location of 12850 St. Albert Trail.

With 28,000 square feet of office and production space located centrally in Edmonton, Blanchett Neon is able to design, draft, manufacture and install signage for all of Western Canada. 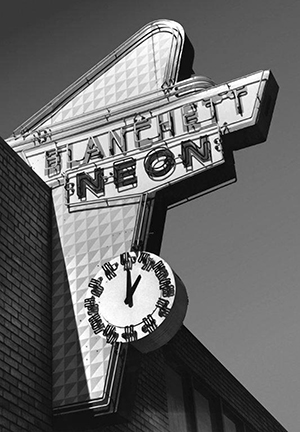 The company was passed down to George’s son and son-in-law, Keith and Robert (Bud) respectfully, and is currently managed by Daryl Blanchett, George’s grandson, who shares George’s vision of producing only the highest quality business signs, delivering a great buying experience and total customer satisfaction.

Today, our clients include a broad range of corporate and small businesses across Western Canada including recognizable institutions such as TD Canada Trust, ATB Financial, Servus Credit Union, Sobeys and IGA, as well as many other top businesses seeking that special, eye-catching, custom-designed display manufactured and installed with the utmost attention to detail.