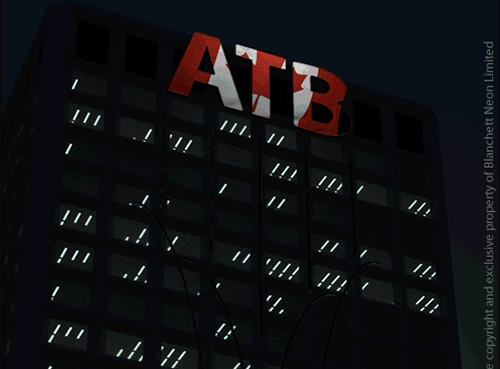 In December 2012, Blanchett was approached by ATB Financial and affiliates in regards to leading-edge technology for their new flagship building in Downtown Edmonton.

Amongst the many early proposals and design concepts, one of the video concepts that our talented design team came up with as a demonstration of the possibilities and capabilities of RGB Illumination for ATB’s downtown Edmonton signage, was the illustration of the Canadian Flag blowing in the wind within the 12′ Tall letters on their to be rebranded headquarters.

The proposal left a noticeable impact, and for Canada Day 2014, ATB Financial applied the same concept to their completed letters, and the result could not have been better. We are extremely happy with the new addition to Edmonton’s Skyline, and hope ATB continues using their technology to illuminate their downtown Edmonton signage in wonderful new ways!